Have you ever tried to meditate? Were you successful? Or did you stop and think “I must be doing something wrong,” because your whole world didn’t magically change? Or your mind wandered? Perhaps you felt silly or uncomfortable?

There are a lot of myths surrounding meditation, so we sat down with Chappaqua resident Dan Harris, to dispel some of the most common myths about mindfulness meditation. Harris is the former co-anchor of ABC’s Nightline and the weekend editions of Good Morning America, author of the books “10% Happier” and “Meditation for Fidgety Skeptics,” host of the Ten-Percent Happier podcast and co-founder of the Ten-Percent app.

When your feelings go unobserved, they can control you, instead of you controlling them. Mindfulness helps you organize, keep track of and clarify your feelings so you can better control them or be mindful of them in the future.

As Harris explains, these uncontrolled feelings can “own and dictate” your outer actions. He says “If you go into meditation trying to feel a certain way, you’re almost guaranteed frustration.” So if the feeling of sadness is what you need to clarify, or bring out of yourself, then so be it.

This will serve as an advantage to you in your daily life, even when you aren’t meditating. Once you become mindful of your own emotions, it’s easier to regulate them and make rational decisions based on how you feel.

“Mindfulness meditation can be practiced anywhere, no matter how glamorous or zen the environment.”

Meditation is only effective when practiced for long periods of time.
Fact: You can experience the benefits of meditation after a short practice.

Mindfulness meditation, although not always easy, is a choice. If you’re forcing yourself into it, it will not be effective. “Don’t try to cut against the grain of a lifetime’s habit,” Harris recommends.

In fact, researchers have found that to build a habit, it’s best to start small and gradually expand. This means that if you pressure yourself into meditating for, let’s say, 45 minutes a day, you’re less likely to stick to the habit of doing so.

So, starting small is the way to go. The top priority is listening to your body. That’s what mindfulness is all about – listening to what your inner self wants and needs.

You can only meditate when in a serene place, surrounded by candles and incense.
Fact: You can meditate anywhere.

What do you think of when you hear the word “meditation?” Is it someone sitting cross-legged, surrounded by crystals, with incense filling the air? If so, that may be one way to meditate, but it’s not the only way.

Mindfulness meditation can be practiced anywhere, no matter how glamorous or zen the environment. Harris describes it best when he says “life is messy.” We never know what life will throw at us, or when we’ll need a little mindfulness check-in.

Plus, if you only meditate under specific circumstances and try to make everything perfect, you are actually less likely to meditate at all. Instead, try being flexible with your meditation – wherever you can create distance from yourself and your surroundings, you can take a moment to be mindful. That’s right –try meditating in taxi cabs, airplanes, cars, anywhere really.

“The next time you meditate and become distracted, don’t fret; that only means you’re being mindful.”

Meditation is only for adults.
Fact: Anyone can practice mindfulness meditation.

Studies have consistently shown that kids who practice mindfulness tend to become more focused and positive in school and at home. Remember, mindfulness helps us recognize our emotions, which helps us control them and the effects they have on us.

Many kids experience difficulties at school because they don’t know how to regulate their emotions. But when kids practice mindfulness, they may be able to gain clarity about their feelings, which will help them regulate those feelings. Then, they can become more positive and focused.

If you’re wondering, “isn’t that a parent’s job?” That’s understandable. However, Harris, a parent himself, says kids tend to reject what their parents try to force on them. So instead he advocates for schools to teach mindfulness, which he believes will create a much calmer and more rational environment, empowering both teachers and students to work to the best of their abilities. Harris also adds “the most important variable, in my opinion, is having mindful parents to model it”, which is essentially the first step to have mindful kids.

To properly meditate, your mind must be completely clear.
Fact: It’s okay to be distracted during meditation.

If you’ve ever meditated or attempted to meditate, you’ve probably recognized that clearing your mind is not an easy endeavor – you become distracted, and your mind starts to wander…. As Harris says, “trying to achieve any state is a fool’s errand.”

When this inevitably happens, it’s common to feel like a failure –  isn’t the whole point of meditation to not be distracted? Actually, no.

In fact, when you get distracted and become aware that your mind has wandered, it actually means that you are developing mindfulness because you are conscious of your thoughts.

Harris says this awareness allows us to “know what’s happening in our head without blindly acting on it.” So the next time you meditate and become distracted, don’t fret; that only means you’re being mindful. 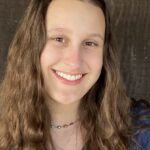 Ava Fleisher is Katonah Connect’s star intern and a local high school student. When she’s not writing, you can find her spending time outdoors, reading, or volunteering in her community. When she grows up, she would like to pursue a career in journalism and travel the world.