Spicy. I wanted spicy. After a few months in Katonah, I still hadn’t found the hot singles scene that I was looking for. Sure, I tried the sewer ribbon-cutting in December – that was a big dump. I’ve sauntered the aisles of DeCiccos in a striking pair of Louboutins, but I always leave with dinner for one. I even bought a hot new outfit from Lululemon to show off at the pickleball court, and Mr. Right eluded me again. Will I have to endure a loveless spring?

And then it hit me like a bag of beans – the Chili Cook-Off! What could be spicier than that? Just the thought of cuddling up with a golden ladle chili champion was getting my peppers simmering. Sure I have a bit of a capsaicin allergy (that’s fancy talk for why I avoid hot foods), but I’m far more allergic to a lonely Friday night! So off I went…in search of my new beau.

I arrived at the Harvey School ready for a wild time. Dressed in a fiery Karl Lagerfeld belted red dress, I checked in, got my tray, pad of paper, ballot and adorable little pencil. I walked right past the nice people at Stepping Stones (did you know the co-founder of AA lived in our neck of the woods?) and headed straight to the cook-off.

I immediately took in the crowd – it was a who’s who of Katonah. Supervisor Ellen Calves, Judge Jodi Kimmel, and a variety of local business owners and big shots. A blur of blonde hair and black wooshed by me. Was that Martha? I adore her and know we’ll become fast friends as soon as we meet, but she was lost in the crowd before I could tell.

It was then I realized my terrible error – I had nothing to drink! I headed back outside to meet the fantastic people at Quartz Rock Winery and Captain Lawrence. I knew a romantic glass of red wine would start my evening off just right. Mr. Right, on the other hand, might be enjoying a pint of beer, so I casually walked by to see if any potential suitors were quenching their thirst with a nice, cold one.

Unfortunately, there was no sign of a handsome bachelor, and it was time to sample the chili before it was all gone. I went back to the Harvey School auditorium, glanced around the room to determine my strategy, and decided to simply start at the beginning. The tables surrounding the perimeter were filled with the different competitors showcasing their chili recipes.

Immediately, I knew I made the right choice. Standing behind the first table was a handsome man with a wide-brimmed hat and a very sexy apron. I have a thing for a rugged gentleman in an apron. He handed me a small sample cup of chili. “One cup or two?” he asked me with an alluring sparkle in his eyes. “Just one,” I told him with a smokey wink. “I’m here unaccompanied.”

He handed me the single, lonely cup of chili and I took note of a wedding band on his ring finger…so much for that. The chili was rich and complex, like nothing I’d ever tasted, but the chef was spoken for. Next table. 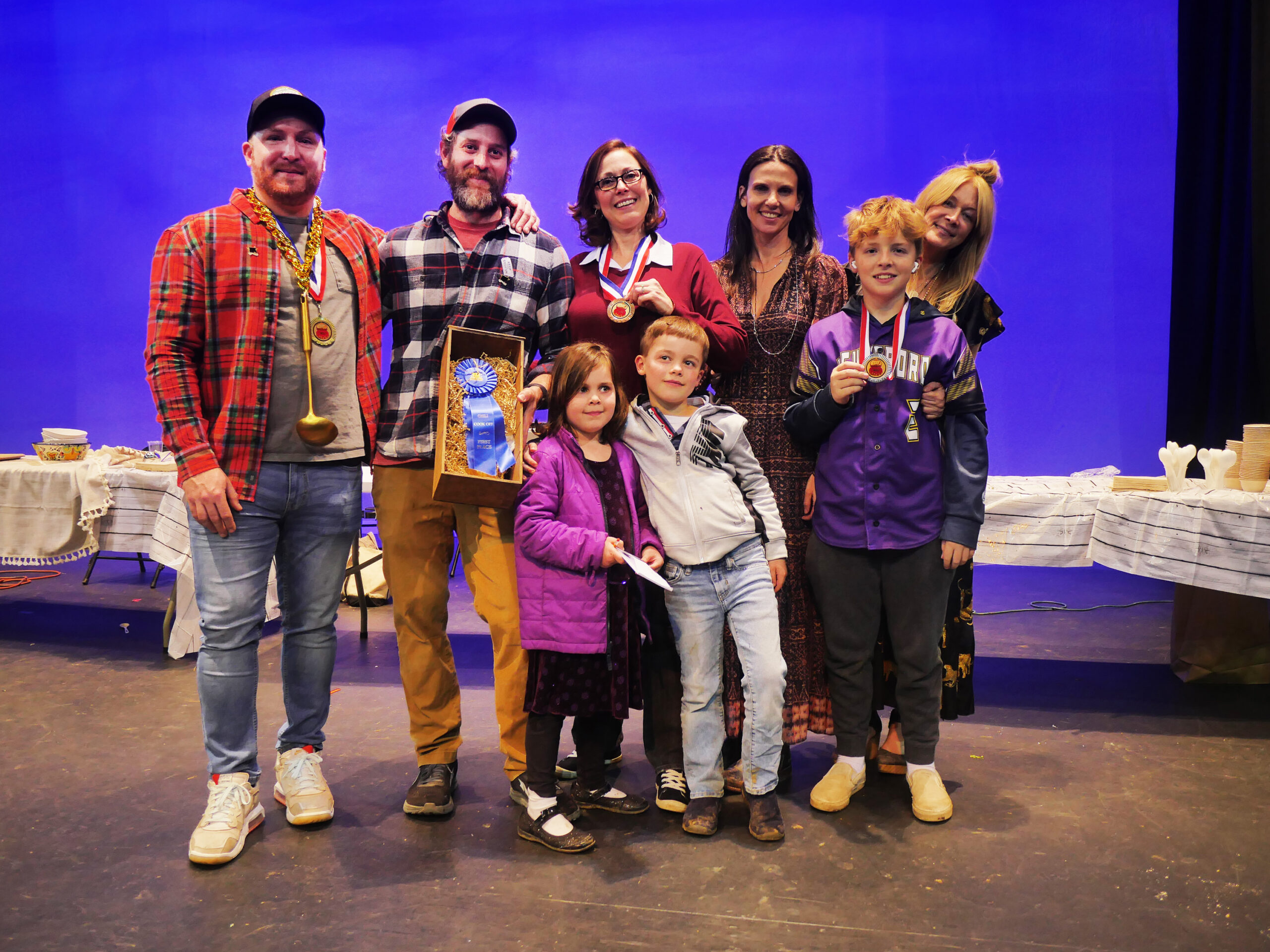 As I moved through the tables, I was constantly impressed by the talent of my new neighbors.  I couldn’t believe that a woman like me, someone who was not much for chili, was suddenly plunging head-first into this cookoff and having a blast! There were a few competitors who ran out of samples before I arrived, but that was fine with me. I met the lovely woman who owns The Blazer with her family right before I came across the next handsome competitor. His name was Jesse, and his chili was actually made from brisket – I’d never heard of such a thing, and it was delicious! Sadly, he proudly told me his wife made the bread served at the event, so he was off-limits, too.

After tasting my last sample from George’s dad (George is only two, so his dad was clearly spoken for), I headed to the center of the auditorium to grab a few tortilla chips. This table was chili-free, and there was an ornate box with a slot cut out of the top. Undoubtedly, this was where attendees would place their chili votes. More intriguing still was the bouquet of flowers strategically placed next to the box. Could those scented beauties have been left by an admirer? Is there a chance they were for me? There was no note, so I stood nearby in case Mr. Right was watching and waiting for me to arrive.

Before I could blush, a young woman approached a nearby microphone. The big moment of the night had arrived. It was time to announce the Chili Cook-Off winner. There were speeches and acknowledgments, and the winner was eventually announced – for the first time ever, there was a two-way tie between Jesse and Graeme Fouste, last year’s winner who was wearing his golden ladle around his neck. I was there to witness history!

The crowd took to their feet and erupted in applause. I joined in, cheering with all the enthusiasm I could muster…and there he was.

A dark-haired gentleman was clapping to my left. He smiled a chiseled, dimpled smile, cheering the winners of the night. I tried to continue my own applause, but I was feeling a little faint.

“Yes. Some delicious recipes,” I replied, extending my hand towards his.

I was ready to introduce myself, ready to invite him for a drink at The Whitlock following the event, ready for chapter one of our fairy tale to begin.

And then it happened – my skin began to burn and there was a sharp pain in my stomach, like a kick to my torso. Suddenly it dawned on me: the capsaicin allergy! I was nauseous, and I knew what was coming next. This was not good, not good at all.

I tried to answer. I wanted to answer. I needed to answer. But the pain grew much worse. My mind ran through what I’d ingested over the past hour – the peppers, the spice, the wine. It was all coming together right now…and I knew what would happen next. Our time was up.

I smiled as best I could and then ran, fast, leaving the dark-haired handsome stranger behind. I darted to the nearest bathroom and was relieved to find it empty. Sometime later, I returned to the auditorium but the room was dark and quiet. The tables had been folded up and the competitors were gone. In fact, there was no one left.

As I walked back to my car (the only one in the parking lot by now), I thought about my second encounter with the dark-haired handsome man. There was kismet between us, that was obvious. But he slipped through my fingers yet again. There will be another chance, I can feel it.

I was promised a spicy night in Katonah, and I got one. Perhaps not exactly as I had hoped, but my search for love would continue on – I know Mr. Right is out there, waiting. I turned up the music in my car as I drove home. My stomach did a somersault. I raced even faster into the night.

Until next time my dear neighbors, 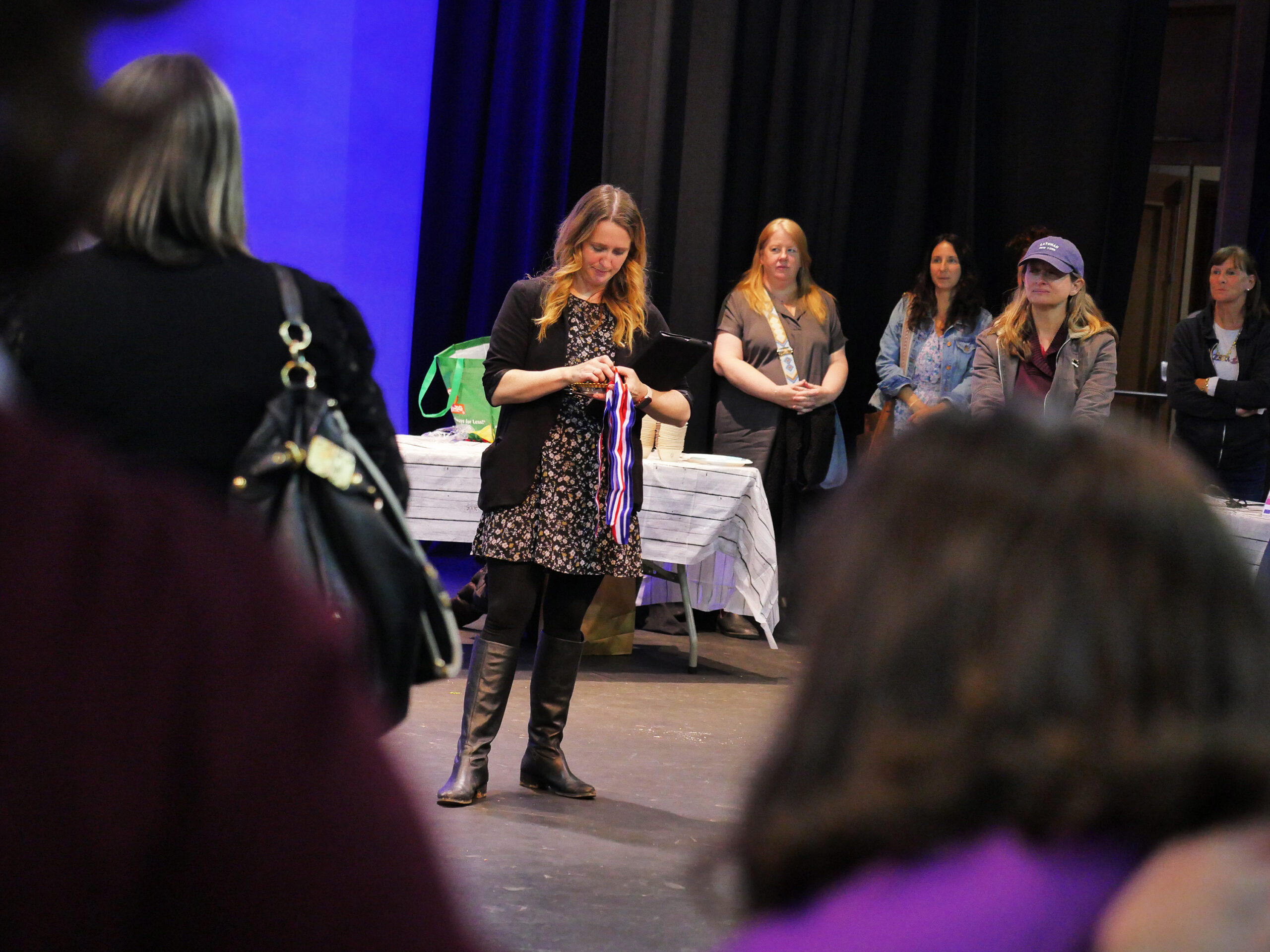 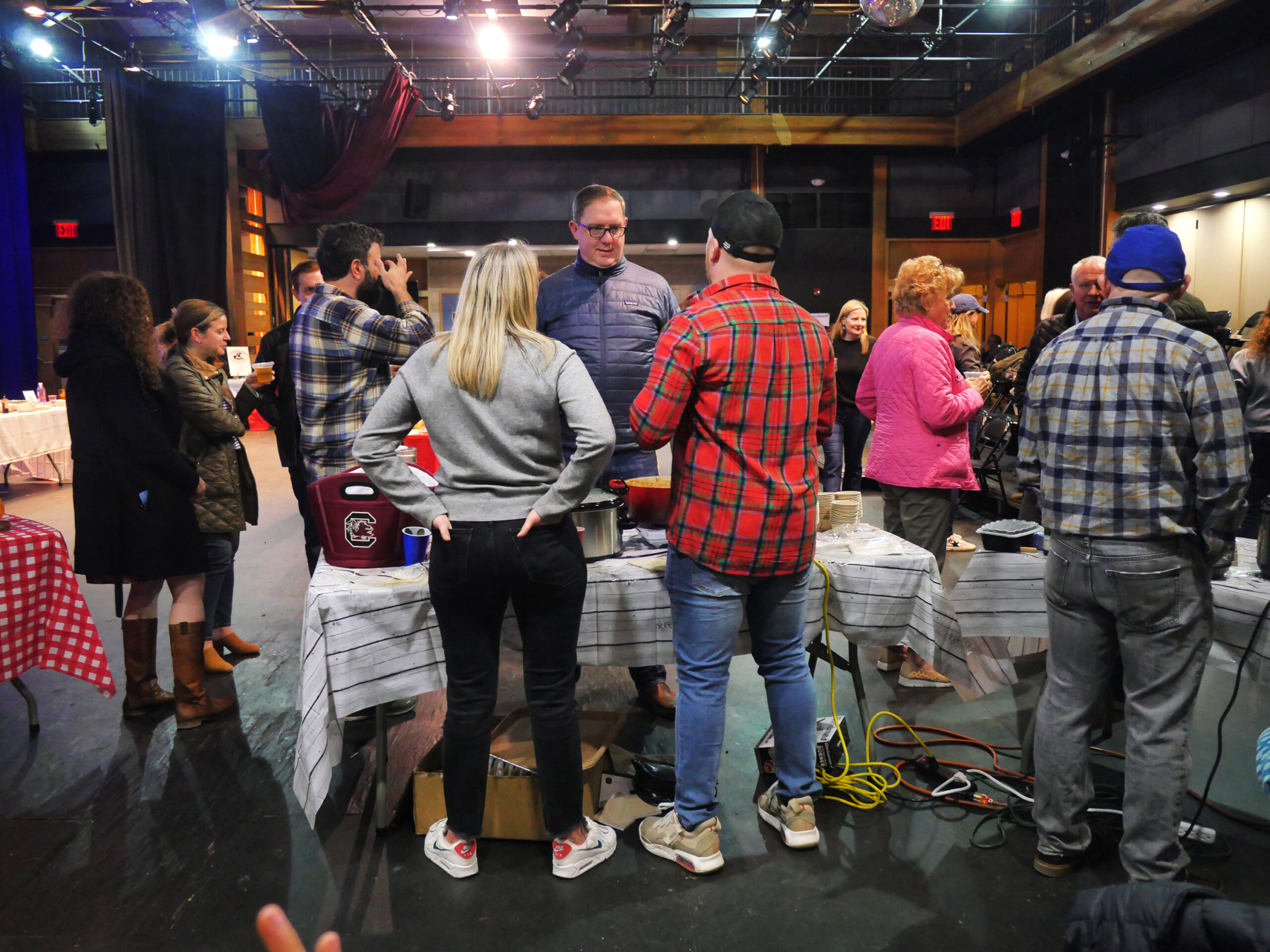 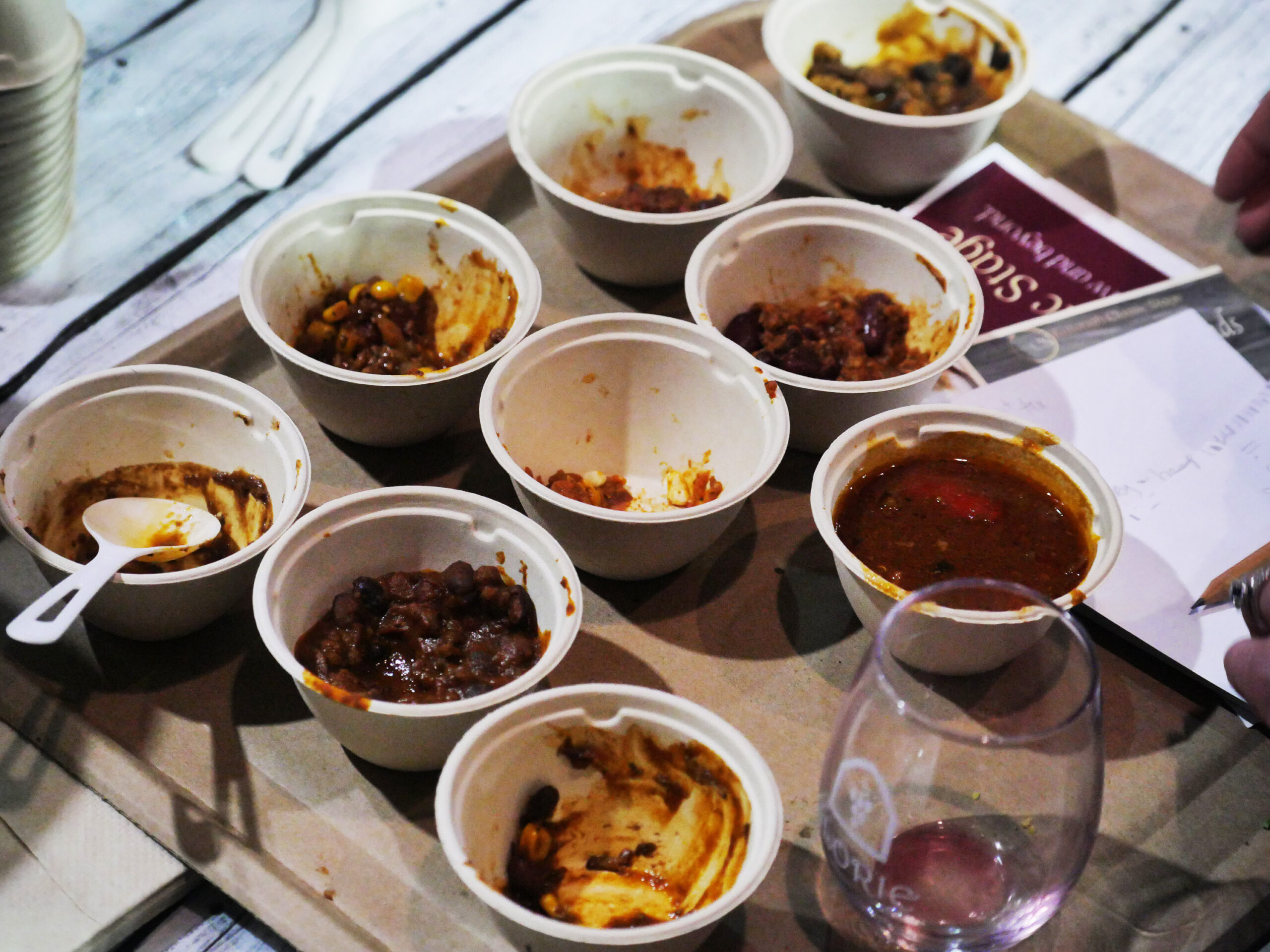 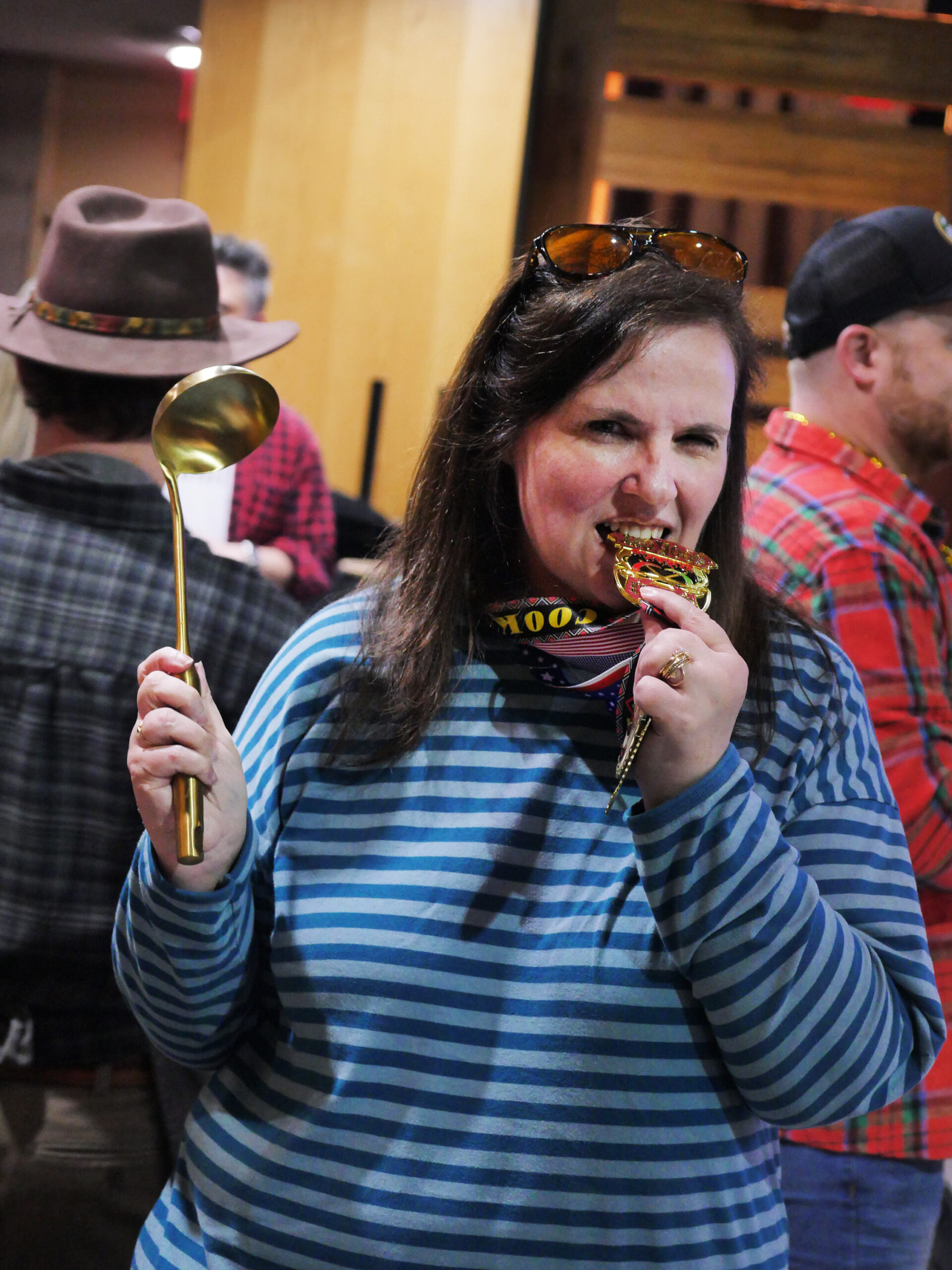 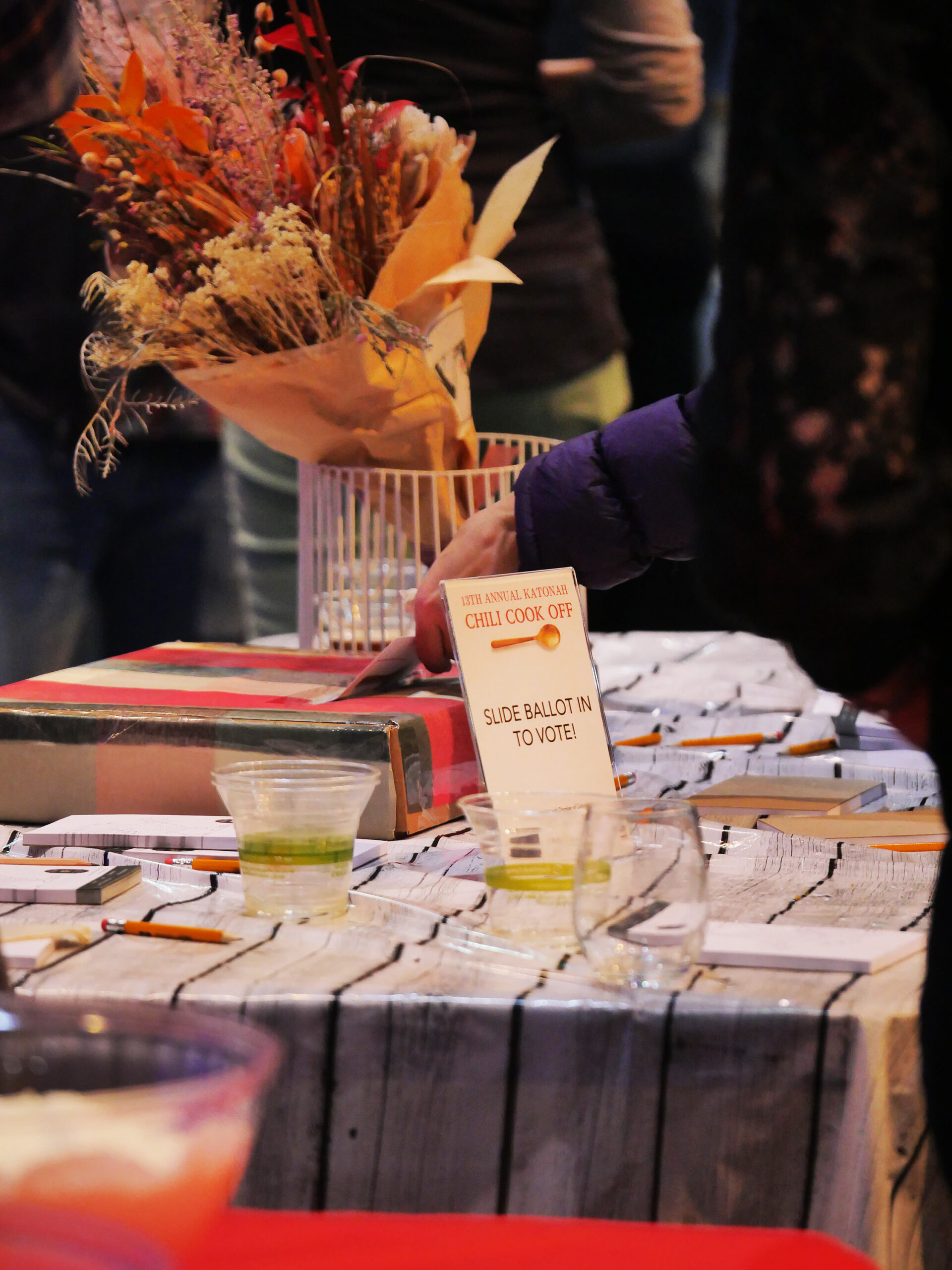 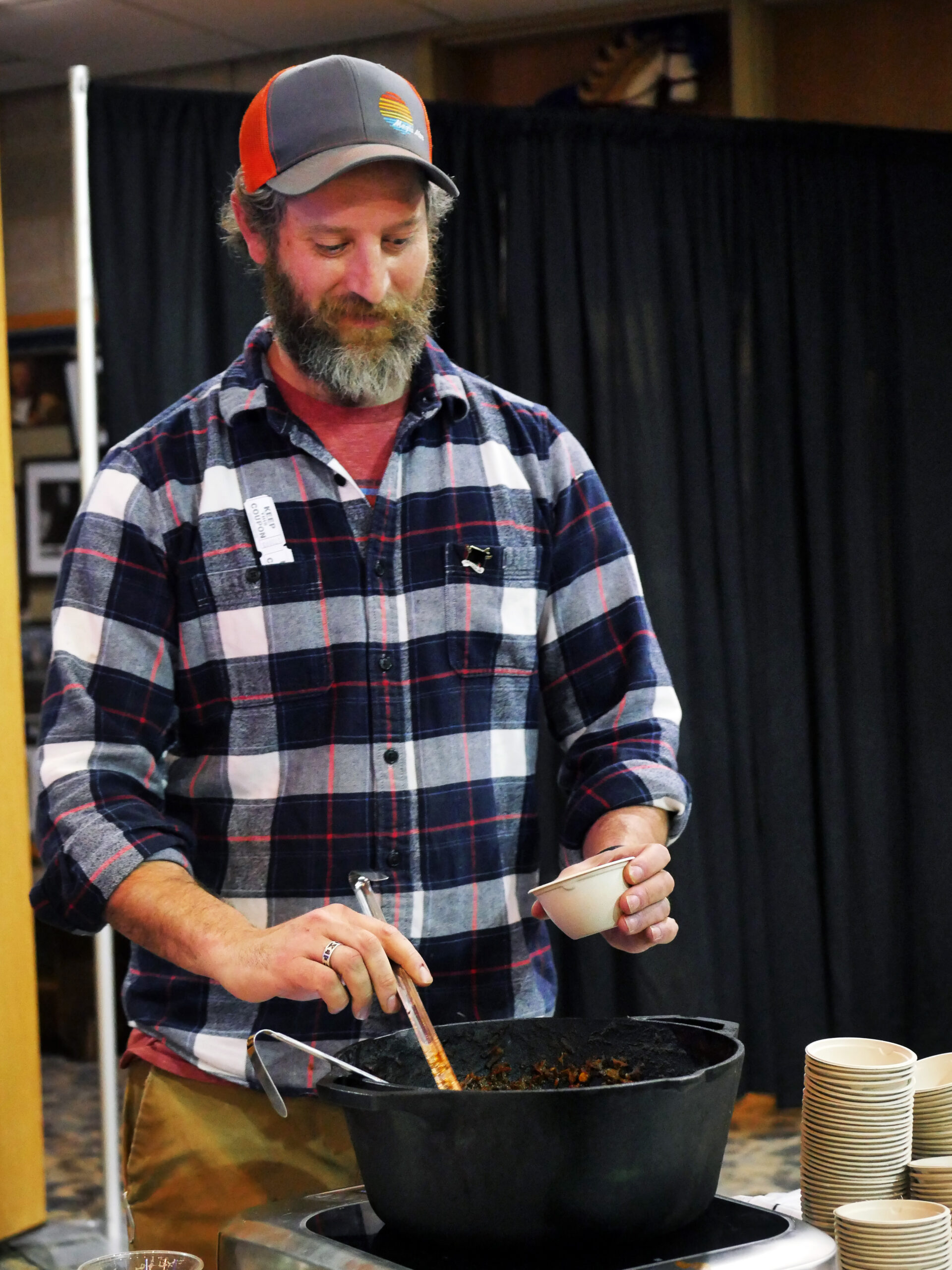 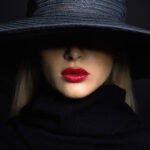 A. Moore  lived in Manhattan for far too long and was tired of city life and the disappointing singles scene. Looking for a handsome man of substance, she moved to the hottest neighborhood in Northern Westchester – Katonah. There’s no better spot for a single girl to meet Mr. Right than the love capital of Westchester. As a Katonah Connect event reporter, follow her for the latest scoop on what’s happening in our towns and her love life.