Whether you refer to it as the Fourth of July 4th or American Independence Day, July Fourth is a day typically filled with family and friends, hamburgers and hotdogs, and, if you’re old enough, a few beers.

However, none of these things were actually invented in the U.S. – they all hail from Germany. Here’s a little background on where our favorite celebratory foods are actually from. 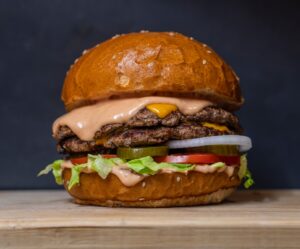 Hamburgers were originally invented during the 12th century when the city of Hamburg, Germany served as a major trading city throughout Europe. Beef was easily accessible and popular, and chopped and ground beef became a regular staple.

But the hamburger wasn’t truly adopted into the American zeitgeist until the 1950s. In 1948, American brothers Mac and Dick Macdonald started a hamburger restaurant they named McDonald’s. Their original claim to fame was 15 cent hamburgers and drive-in dining, capitalizing on the new accessibility to motor vehicles. Even though the brothers were from New England, they began with nine locations up and down the west coast because that’s where a large majority of German immigrants settled. 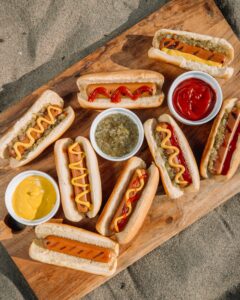 While many people believe the hot dog originates from Frankfurt, Germany, some disagree. The debut of the German sausage was actually in Coburg, Germany in the early 17th century. It was manufactured by Johann Georgehehner who traveled to Frankfurt to promote his new food, which he called  “dachshund” or “little dog.”

Other butchers in the area adopted his idea, combining their unusable pork parts and selling their own dachshunds. Pretty soon, the food became associated with Frankfurt Germany.

Rumor has it that these particular dachshunds came to America via  a  German immigrant during the 1805s who began selling them from a cart on the sidewalks of New York City. (Sound familiar?)

But they didn’t become popular in the U.S. until the 1870’s when a German immigrant named Charles Feltman opened one of the first “hot dog” stands in Coney Island. He sold the sausage between two buns of white bread. In his first year he sold 3,600 hot dogs!

By 1893 Hot dogs were sold in every baseball stadium in the United States. 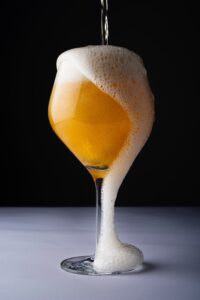 Although the origins of beer are not totally rooted in Germany, the beer we drink today was highly influenced by German brewers.

Beer can actually be traced to 5,000 BCE in Iran, however the beer they drank was nearly unrecognizable to what you enjoy today. Ancient fermented grape wine, wheats and barley libations would typically include an emulsified blend of cheeses, olive oils, carrots and mugwort (a European plant).

But by the first millenia German monasteries began to produce beer for mass consumption across southern Germany (and a few still do so today: Kloster Andechs, St. Gallen or Weltenberg). Why monasteries? At the time, beer was safer than water (the alcohol in beer purifies itself), so it became very popular.

In the 19th century, German scientists discovered barley’s role in beer production – the yeast. They separated the two yeasts into two species by end product: the one that floats and the one that sinks. These two yeasts are still used across the world to produce IPAs, pilsners and lagers, along with many other types of fermented and distilled liquors and beverages.

So when you put some burgers and dogs on your grill and enjoy a refreshing IPA this July 4th, don’t forget to give a little “danke” to the Germans for making your favorite American holiday truly…American? 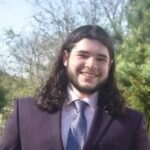