When COVID-19 hit the United States in 2020, 12-year-old Waccabuc resident Colby Kipnes began distance learning, just like her peers. But unlike most other children, Kipnes also took on the very adult role of working from home. But, her work couldn’t be done at her desk – she had to work in a closet, her mother’s closet, to be precise. Kipnes is an actress who was the voice of Oona on Nickelodeon’s “Bubble Guppies” for seasons five and six, and even though live theater was closed during the pandemic, cartoons were still being made.

Kipnes needed a space that could prevent sound waves from bouncing, so a small room full of clothes was the best option, and her mom’s walk-in closet fit the bill. Like anyone who worked from home during the pandemic, Kipnes struggled to get the location, and the technology, figured out. She and her mom did everything they could to create a make-shift studio, including hanging blankets from the ceiling and upgrading their technology. To record Oona, Kipnes used one iPad to connect with the director, another to connect with the producer, a computer to connect with the network and a microphone to record. It was complicated.

“That was an experience,” Kipnes remembers. “The blankets kept falling down! Plus, my mom and I aren’t very technical. We had to get all of these adapters and connect everything to the Wi Fi, and then a massive storm came through and all of the cable was out during a “Bubble Guppies” recording. It was such a mess!” 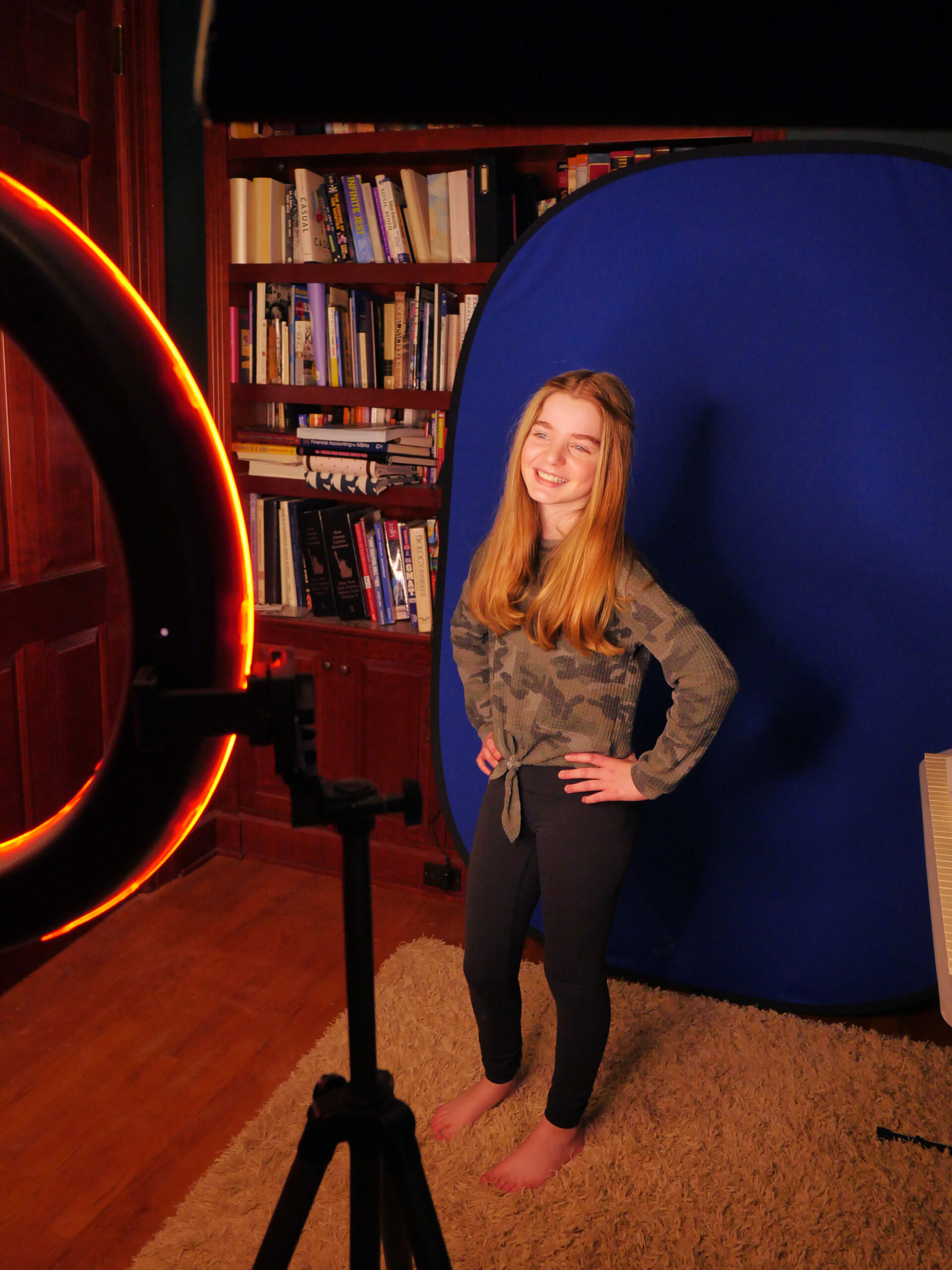 Eventually, Kipnes decided to use her earnings to purchase a WhisperRoom – a professional sound booth that now takes up most of the space in her mom’s law office. “It’s really not her office anymore,” says Kipnes.

Kipnes’ career began just before she turned seven. She would sing and dance around her home, so her mom signed her up for a singing class.

“The teacher was like, ‘Oh, she’s actually not that horrible,’” says Kipnes. “She told my mom that a manager was holding auditions and maybe I would like to audition. So, I auditioned for manager at an open call, had a call back, and I got him. I’m still with the same person (Jason Bercy at Bercy Talent Management), and he sends me auditions all of the time.”

When she was eight years old, her agent sent her on an audition for a show on Nickelodeon, “Nella the Princess Knight.” A new character, Riley, was joining the cast for season two, and he thought she’d be great. It wasn’t her first audition, but it was one that would change her life.

“I auditioned, I got a call back, and then I actually didn’t hear back for three months,” she remembers. “I actually forgot about it. And about three months later, they called and said, ‘you got the part.’ I was like, wait, which audition was that for?”

She was in second grade and played the part of Reilly for the entire season. When that ended, and before she became Oona, Kipnes performed in the regional production of “Joseph and the Amazing Technicolor Dreamcoat” through A Contemporary Theater of Connecticut, known as ACT of CT, which is her home theater.

At ACT, Kipnes has worked alongside professional Broadway actors. Her roles have included a soloist in “Godspell” and a member of the children’s ensemble in “Evita.” This relationship also gave her the unique opportunity to perform as a soloist at a Salon Night in Greenwich alongside Broadway actresses Jessica Vosk and Caitlin Kinnunen.

Whether through ACT, auditions or paid gigs, Kipnes has also worked with many of the child actors in the area, and many of them have become friends. This past December, she performed alongside several friends, playing Martha Cratchit in “A Christmas Carol” with the White Plains Performing Arts Center (WPPAC).

“It makes me so happy,” she says. “Being on stage or being in a recording studio and acting, singing and dancing – it just makes me so happy. It brings so much joy to my life. It takes a lot of hard work, but it’s a really good outcome. You have to put in the effort and get over the nos. I get, like, 1,000 no’s a day, but you have to get over those and be excited for the yeses.”

Most recently, Kipnes played Winnie Foster, the main character in “Tuck Everlasting,” at the 92Y in Manhattan from March 20 through April 10. Kipnes says she was “super, super excited” when she learned the news – this was one of her dream roles. “Good Girl Winnie Foster” has been Kipnes’ preferred song for auditions during the past several years. 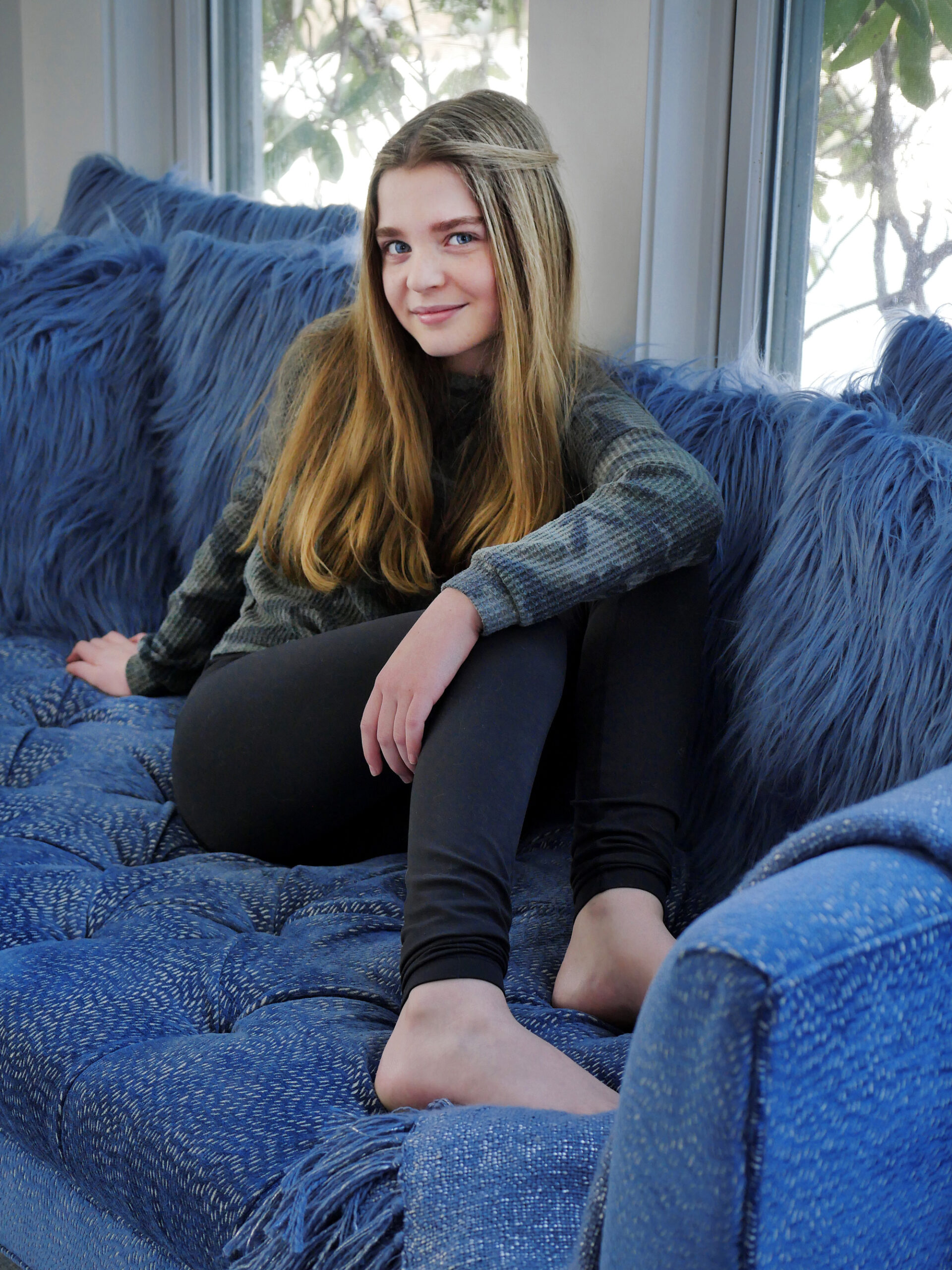 But what Kipnes wants you to know is that she’s a normal kid. She loves to read, draw, watch horror movies and hang out with her non-theater friends. She has two siblings, an older sister, Kyle, who is 16, and 10-year-old brother named Asher. They don’t put her on a pedestal, and they don’t really get why she does what she does.

“Asher’s first question, whenever Colby books a gig,” says their mom, Karen Kipnes, “is, ‘how many times do I have to see this?”

And like a child who is very committed to their chosen activity, she’s busy. “My schedule is very packed,” she says. She has voice lessons three times a week, works with a performance coach and an acting teacher, and she dances five days a week. Plus, there are auditions, rehearsals, performances, etc.

“Try to not cough during the Crucifixion scene…”

On stage, Kipnes has had her share of follies. There was the time where she was center stage during a performance of “Godspell,” ran and fell flat on her back. Of course, that was the one night the show was recorded. Or, there was the time she ran downstairs to do a dance number for a show and one of her shoes came off. She didn’t have time to put it back on so she did the entire number wearing one shoe.  But the most memorable was when she was sick, but performing in “Godspell.” And, as they say, the show must go on.

“I was sick, and had a bad cough,” Kipnes remembers. “I had to be onstage the entire time, so I snuck throat lozenges into all of my pockets. Before the show began, the director was like, ‘can you try not to cough during the Crucifixion scene because it’s very distracting?’”

Kipnes’ dream is to be on Broadway, and she’s come close. Two years ago, she was one of three finalists to play young Elsa in “Frozen”– the two other girls got the part. But she’s not yet sure what she wants to do when she grows up.

Do you know a tween or teen whose life is unusual or extraordinary and should be featured in Katonah Connect? Email us at katonahconnect@gmail.com.